Hey gang! Well we had a few nice days to thaw ourselves out and then now we’re right back at this winter thing. Yesterday when I woke up it was 57 degrees and the snow was all gone, and when I went to bed it was 15 degrees and snowing hard! Craziness!! While the farmers appreciated the nice weather to thaw things out, it does come with some disadvantages. One being mud. The ground never really froze since it was warm when the snow came and it kind of insulated the ground so the farmer is having a tough time getting around with the tractor in some areas. The second problem with the weather like that is pneumonia. Cows don’t like a lot of fluctuation in temperature and dropping 50 degrees in one day is pretty hard on us. But, my farmers know what to look for and they will keep a close on eye on everyone in the days to come!

If you follow me on Facebook, you learned in my last post that I am now officially weaned. I promised I would explain what that means and the life cycle of a cow on a dairy farm. So here we go.

A calf is born. Take me for instance. Calves are born in what we call the “dry pack” part of the barn. It is a large area completely filled with fluffy straw and expectant mothers. The calf stays with her mom for a little while, unless it’s necessary to remove her right away, like if it’s completely freezing outside and she needs to be somewhere warm. If it’s winter, the calf is placed in a big water tub and gets to live in the heated office for a few days, till she’s not wobbly and is drinking good. If it’s not cold out, the calf is taken to her own hutch. Each hutch is washed and disinfected inbetween calves, and then filled with lots of straw. The calf gets her moms colostrum to drink in a bottle. My farmers try to give calves their own moms milk for at least a week. After that, they switch to either a milk replacer, which is just like baby formula for calves or they use milk from the tank. Calves stay on a bottle for about 2 weeks. Then we switch over to a pail, as you may figure it’s necessary for us to learn how to drink from a bucket not a bottle. Most calves get weaned about 2 months after they are born. That means they stop getting milk, and are to get all their nutrients from water and grain. Weaning can be kind of a stressful process for the calves so my farmers do it really slowly so we get accustom to the idea over time. For example, if I was drinking a full pail of milk twice a day about 2 weeks before I’m weaned they may cut me down to half a pail twice a day for a few days. Once that happens, I’ll start eating more grain. Then after a few days, they’ll cut me back to half a pail only once a day. Then I’ll start eating even more grain. Then after a few more days they may only give me a third of a pail for few days. And then I’ll be weaned. By this time, I have gotten used to relying on my grain instead of my milk and I’ll be all set for my next move.

So what’s next? The farmers keep me in my hutch for another week or so, just so they can monitor exactly how much grain I’m eating. Some calves don’t take to it right away and the farmers want to make sure everyone is eating well on their own before they we get moved into a group setting. If I don’t like eating grain by myself, I am certainly not going to eat it with others! So after its established that the calf is doing well, she and a few of her friends that are close in age will move to the larger size hutches together. This is the first time in a group setting. The group is really small,  at most 10 calves, and they are all close together in age. This is kind of like preschool. Here is our first time to learn how to interact with others, how to establish a pecking order, and how to eat with others. This is a really fun time to just hang out with friends. These friends we make, believe it or not, tend to be our friends all the way into adulthood. We hang out with them every move we make from now on. Even if we don’t have to. Here’s what that area looks like: 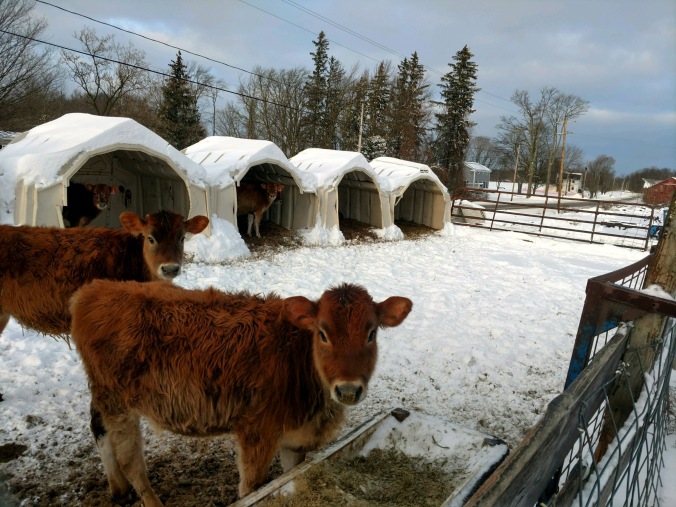 You can see the large hutches are filled with straw to sleep on and each hutch holds 3-4 of us, so we can pick who we want to sleep with. We stay in this setting for few months. Towards the later part of that time, the farmer starts transitioning our feed to TMR, which is a mixed feed of corn silage and haylage and minerals that is specifically designed for us.

Next comes elementary school, aka the heifer barn. Our heifer barn is split into 3 groups. The first group is the youngest heifers, which is the next step up from the super hutches. In this group, you learn how to lay in a stall, and continue working on your social skills. After 4-6 months you move up to the next group. That’s kind of like middle school. You’re in that awkward phase where you’re growing fast and don’t look even and you’re starting to get your hormones. In this group is where most heifers are bred for the first time. This group you also learn how to eat using headlocks. Not a huge deal, just have to stick your head through but it can be daunting to some. You stay in this group for another 4-6 months. Last in the heifer barn comes high school. This last group is mostly all pregnant heifers and a few that need to be bred, and occasionally a few dry cows. Heifers stay in this group until about a month before they calve, and then they move up to the dry pack, which is where we started our journey as a calf. Here’s my friends in the heifer barn: 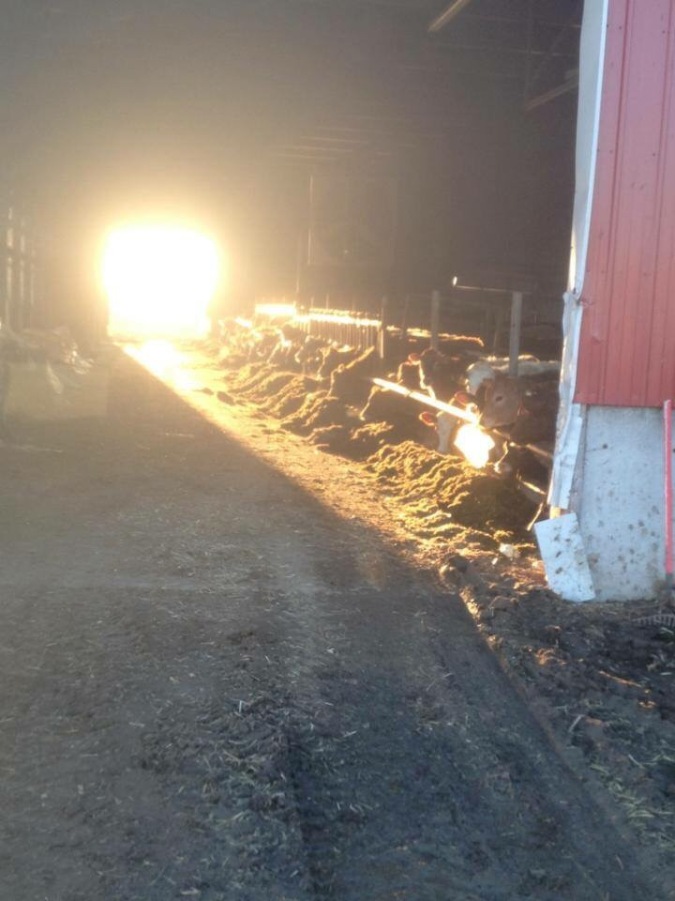 So a cow or heifer (what’s the difference by the way? A heifer is a female bovine, they are called cows once they calve. Most farmers still refer to cows as heifers the first year after they calve) calves, and then what? Well we now know what happens to the calf, so what about the cow? The cow is kept in a large pen that is situated in between that dry pack and the parlor. This pen is also filled with straw, and has easy access to the parlor. This makes it easy for cows if they’d had a difficult calving then they don’t have far to walk. It’s also a good place because it’s an area that’s walked by frequently, so the farmers can check on those that just calved all the time and make sure they’re doing okay. (Kind of like when a human has a baby and the Drs come and take your vitals like every 2 hours so as soon as you fall asleep they wake you back up). But it’s important, it is a major event and the farmers want to make sure the cows are healthy. The cows live in that pen for a few days or more, depending on how the cow is feeling. Some are ready to go right into the barn (some even go crazy to get back out there because they miss their friends), some like a couple days of quiet time. When the cow and farmer decides it’s time, the cow is then let back out into the free stall barn. 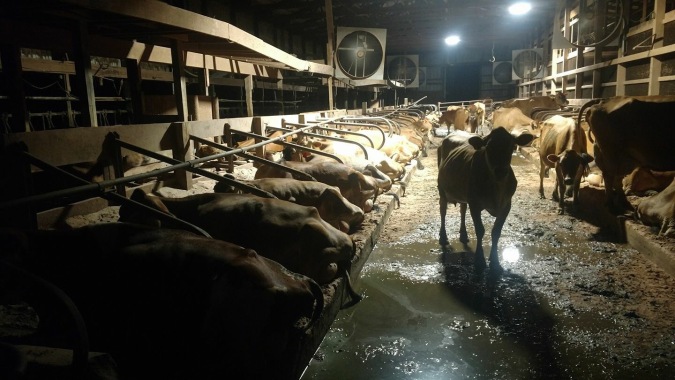 Being in the barn is like the real world after school. You get your job and settle into what life is like. You can see this picture was taken at night, so most of the cows are sleeping. The cows day is filled with eating, resting and A LOT of gossiping and socializing. And trying to think of ways to get into trouble. Milking is in there too, but it’s not a major part of the day. A cow is only milked for about 10 minutes at a time, and our girls are milked twice a day so they only have to show up to work for about 20 minutes a day. In the spring and summer the cows have “recess” and have access to pasture. Cows do get bred back, but farmers wait at the very least 60 days before breeding a cow after calving. Most of the time the cow won’t get pregnant for a few months after that. (Kind of like a woman who is breastfeeding, those first few months your body is getting adjusted to making milk and it’s not until your hormones regulate and your body levels itself off that a woman can get pregnant, cows are the same way). Although there is some that will breed back right away, most take a few months longer and a few times of trying. Cows are pregnant for 9 months. 2 months before a cow is going to calve the farmer dries them off. That basically just means they stopped getting milked and move from the freestall to the “dry pack” where they just rest. It’s kind of a nice deal, your food is brought to you, your doctor is brought to you if needed… any human who’s had a baby knows those last few weeks are exhausting, especially when you add in having to drive to the doctor all the time. My farm mom was jealous of the cows when she was pregnant.

So that’s basically how a cow grows up. It’s a pretty easy life and us girls are well cared for, well fed and have all we could need or want. And just like people, those friends we make early on stay with us forever. My farm mom says almost all the cows have at least one other cow that they like to hang with. They get milked together, eat together and sleep next to each other. It’s pretty sweet.

Okay gang, I think that’s a wrap for now, if you have any questions feel free to let me know and my farm mom will do the best she can to answer them. Don’t forget to follow me on Facebook and invite your friends to do the same!